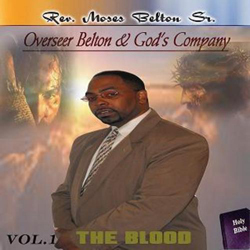 We get up close and personal with Overseer Belton and Company about his music and career on NiaRadioNetwork.com

For Overseer Belton and God’s Company, ministry is at the heart of everything. The Chicago-based gospel quartet showcases their passion for ministry and music on their highly-anticipated debut release, The Blood. “I want to display the power of testimony through our music that is relatable to people,” says Belton.

The Blood features a soulful set of tracks that focus on messages of inspiration and hope. The CD is set to hit the streets in late July 2010. The Blood will be marketed and distributed nationally through Independent Distribution Collective Company in various retail stores and online digital music websites.

Originally, the group formed in 2007 when they were known as the Royal Light Juniors. But as time progressed and members changed, it evolved into Overseer Belton and God’s Company. Now, Overseer Belton and God’s Company maybe a new as a group, but the members are not novices to the gospel music industry. Collectively, they have 25 years of experience. In fact, the group’s leader, Moses Belton, Sr., is an accomplished songwriter and music entrepreneur in his own right. As a songwriter, he acquired a publishing deal with Atlanta-based DH Publishing, in which he has submitted several songs and some have already been recorded by well-known gospel artists. In addition, he is the President of Quartet City Records, an independent gospel label based in the Chicago area. He also serves as an Overseer in the Pentecostal Assemblies of Christ International, Inc., providing pastoral oversight to churches in state of Illinois.

Connect with Overseer Belton at:  http://www.reverbnation.com/overseerbeltonandgodscomp