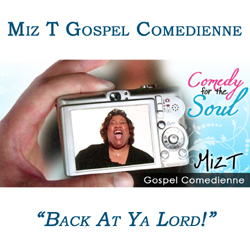 Get ready to laugh as we interview gospel comedienne Miz-T and get up close and personal about how she got started.

Where ever there are ears to hear, and a sound system to project her voice, MizT has been bringing the laughter to folks in all sorts of venues, like churches and banquets.  And she does it in a clean, non-profane manner…pleasing to audiences of all ages — from kids to senior citizens. As an entertainer MizT is a triple threat; aside from her comedy, she’s also a singer with a powerful voice, along with being an accomplished emcee (MC). When she’s not captivating audiences, MizT is a devoted and doting mother and grandmother. It seems performing was pre-ordained for the Austin, Texas native whose real name is Tranea (Tra-NAY) Prosser.  Both her mom and dad were singers of some note…with her late father, Harvey Prosser, being a member of the Soul Savers quartet.  Tranea has sung in church choirs for most of life…and is presently a member at Freedom Home Baptist Church in Austin.

When asked about her style of comedy, Tranea says; “Its rated ‘I’ for Infectious and for Innocence.”  As for a personal rating…MizT would have to be rated ‘H’ for Humble and ‘G’ for Grateful:  “I’ve been given a great gift by GOD, it’s an honor and a joy to share it.  I thank GOD for allowing me to minister to folks with my gifts of singing and comedy,” says the extraordinarily talented and unforgettable MizT.